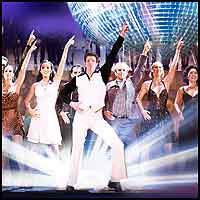 "Saturday Night Fever" is now playing at the showroom inside the Sahara Hotel and Casino. It is the musical adaptation of the landmark film of the 70’s. There have been a multitude of titles that have successfully made the transition from screen to stage, or stage to screen, but it is sad to say that this Las Vegas production is probably not one of them. Probably the primary reason that this production has the failings that it does is the same reason that other productions of its kind have also failed---that is the misconception that Las Vegas crowds cannot stand a show with an intermission. Every time a full length musical has come to town and is then cut to a ninety-minute presentation, it has failed. You would have thought producers would have noticed this by now...but apparently, they haven’t. "Notre Dame" at the Paris failed because of this, as did "Footloose" at the Rio, and now "Saturday Night Fever" seems well on it’s way in following suit. All of these shows have had a proven track record. They were successful in many other venues---and then brought to Vegas and ripped apart. How can you even expect a show, that in its original form ran two and a half to three-hours long, be viable when nearly half of the show is cut? It becomes a sketchy "highlight" version of the original with songs and scenes becoming disconnected and out of context. The two musicals that have had success in Vegas, "Chicago" and "Mamma Mia," maintained their length and their intermissions...hello? The acting, the story, and the focus of this production all suffer due to this truncation. In the movie, the main character, Tony Manero, used his dancing to escape his reality, this ultimately shows itself to be unfulfilling and he sees the need to make a transition into a bigger world...we don’t get to see any of this in this production. Tony Gonzalez does the best job he can with the role of Manero, but in the end, fails because he is never really given the chance to act. We don’t get to see Manero being vulnerable or in crisis at any point---we don’t get to see those elements, which actually create both a story and drama. The focus of this production is the music and the dancing. We are all familiar with the music...and I thought that we were familiar with the dancing, but again I was surprised. The dancing, while fun, is inconsistent. There seemed to be a conscience effort to avoid the dance moves that have become stereotypically the "Saturday Night Fever" moves. Instead, the choreography combines disco with many other forms of dance. The tapping and stomping sequences seemed especially out of place. There is a notable stand out in this production, though. Clarissa Grace, in the role of Annette, somehow transcends herself above and beyond the production around her. Her acting is solid. We get both the subtlety and dynamics of her character. Her voice is incredible, and when she sings, she continues to act, and we get to see the emotional content within her performance. This production has come to town with a lot of hopes and anticipation, but it has fallen victim to the old style of thinking that continues to pervade Las Vegas shows. Both the audience and cast need the chance and the opportunity to enjoy the entire show, and we need to be given the prospect of seeing the show in the format that made it both successful and a true cultural icon.