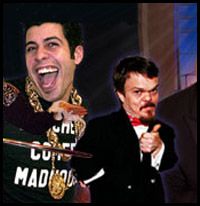 "Beacher’s Madhouse" plays every Saturday at the Joint inside the Hard Rock Hotel. The show does its best to set a party-like atmosphere that is hip and cutting edge with the elements of the evening being part show and part nightclub. It is self-described as, "the world’s greatest comedy variety xxxperience!"---but sadly, there is not a lot of truth in this advertising. It is, for the most part, a dreadful experience. The show is badly run, badly put together, and even the decent people in the production come off as amateurish. The two headlining comics did a good job, but their sets came on so late and were cut so short that there was little hope of salvaging the evening. The problems of this production started with the arrival at the Hard Rock. No one seemed to know what was going on, no one knew where anyone was supposed to go, and the effects was astonishing to watch as both staff and audience members with tickets in hand wandered around aimlessly with bewildered looks on their faces…needless to say, the show started really late. The "Pre-show" was more than an hour overdue. Pre-show host, Pete Giovine, did his best to whip everyone into a frenetic state, but there just wasn’t that much to get excited about, and he just got annoying. Even worse than Giovine, though, were the production assistants that ran through the audience yelling, "Get up! Get up! Get on your feet!" The pre-show contests were demeaned as Giovine tried to put himself into everyone’s act. His efforts to intimate himself brought the whole experience down. It seems that Giovine was under the impression that the show was about him, and it wasn’t. "Beacher’s Babies" are the chorus of dancers that come on in order to break up the acts. It would have been nice to see them better utilized. You have the people, the costumes, and the music---let them dance. Let them put together a real number instead of a minor bump and grind segment, and allow these people to shine. These are good people that are badly employed. "Beacher’s creatures" are a menagerie of random talent that is brought out as one large group. Each is battling for position to try and show off even a little of what they do, but none is truly successful. I can only say that I hope they’re being paid well because never before was so much effort put into so little effect. Beacher, himself, is slated as the host for the show. His appearances come off as cameos at best, and at worst, he comes across as an egomaniac with no charm, no charisma, and no stage presence. The evening was not a complete waste. The two comedians, Robert Kelly and Jim Norton, were great. Both comics delivered good sets of material, but both of them were cut short. Their professionalism set them far apart from the rest of the production, and for a moment, you forget the rest of the evening’s mess. The other interesting act for the evening was "Leonard the Magnificent"---who was both engaging and amusing. "Beacher’s Madhouse" comes off as a show that has been put together by people who have no idea how to put on a show. The production lacked major elements in both cohesiveness and professionalism. Oddly enough, for all of the hoopla, I expected a much raunchier night, but all in all, the evening was rather tame. Done correctly, the show could be an attractive draw to a target audience, but currently the production is severely deficient.