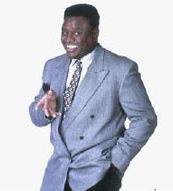 George Wallace is playing the late night slot inside the showroom at the Flamingo. What was to be a trial three-month run, turned into six months, and now has him playing the room for a year. The extension of this run is due to the talent of Wallace and his ability to make us laugh at his observations about life around us.

Wallace got his big break into the world of comedy as a writer for Redd Foxx, and the comparisons to Foxx are undeniable and plentiful. As an older stand-up comedian, Wallace, like Foxx, sets himself apart from the rest of the pack and can get away with a lot of observational humor that younger comedians can’t.

With one joke coming right on top of another, coupled with the brilliant and easy delivery, Wallace goes on for well over an hour with the room in a continual state of amusement.

During the first part of the show, Wallace seems to dedicate himself to a free form sort of “chat” with the audience. There is no structure, and you cannot predict where the rambling might take you. Wallace has a comment and commentary on anything and everything, but it never fails to be humorous. The pace of this first part of the show, though, does often suffer as the transitions are forced from one topic to another.

The last part of his show is dedicated to the fully scripted material, and the change is noticeable. The delivery becomes quicker, easier; and the jokes fly easily from one thing to the next. You are still laughing at one joke as the next two are piled on top. There is barely time to breath.

The warm-up comic for the show is Carol Siskind. She does a good job with her set and truly does get everyone in the spirit and the mood to spend the evening laughing.

The showroom at the Flamingo seems to work well for Wallace. Upon entering the space, one might think that the showroom it just a bit too large to comfortable accommodate the one-man show, but Wallace does a good job at drawing the crowd in and making everyone feel right at home in the space.

Wallace will hopefully continue to do well in the showroom. He is a great comic that offers a unique perspective on life and the world around us.