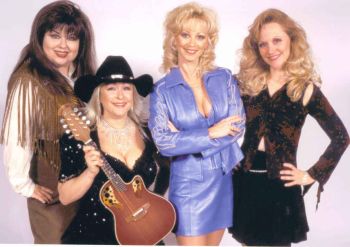 "The Honky Tonk Angels Opree" is playing at the Gold Coast Hotel & Casino. It is a show of impressionists in which you get to hear a lot of the stars who have made country music great. The small cast shows off an amazing deal of talent as they shift through the songs and artists, and the live band augments the evening wonderfully. There are no big sets or props in this show; it is about the people and their talent. The "angels" provide a plethora of talent; Lori Legacy, Corrie Sachs, Lolli Jones, and Ginjer Conway show us singers from Reba to Dolly and everything in between. Each night also provides a featured male artist, and on this particular evening is was Dean Simmons doing Garth Brooks. The show gets off to a strong beginning with Legacy’s auctioneer song performed as a ventriloquist act. Another highlight of the show features the instrumental versatility of Jones who take the audience on a phenomenal musical tour as she switches from one instrument to another, and exhibits a seemingly endless mastery. It is definitely the panacea for anyone who thinks Las Vegas entertainment is simply about topless showgirls. This show, again, is about talent, and each performer is blessed and replete with it. Each of the performers does a wide variety of artists, and obviously, some are going to be a bit better than the others, but what is truly inspirational about this cast is that with every person they imitate, they at least are able to bring you the honest essence of that artist, and while they sing, we are able to hear and see what we imagine best about that person or song. Most all of the songs are lively and upbeat, and there is hardly a moment when you aren’t tempted to sing or clap along. Now...while liking country music is not a prerequisite to the show, it doesn’t hurt. For the fan of country music, all of these songs will be familiar and friendly and bring a joy into your heart. The non-country music fan will appreciate the talent and abilities of the singers and musicians, but who knows? There may even be a few knee-slapping converts to the genre. After all, they do play two types of music...country and western. The showroom at the Gold Coast is very modest in size, but works well for this show. There exists an intimacy between the audience and the performer, which creates a good connection and relationship. Part of the reason the show works is this strong connection that permeates the showroom. It is Southern hospitality Vegas-style. The cast and the musicians share the small stage wisely and make the most of the limited space that they have available to them. "The Honky Tonk Angels Opree" is a fun little show to see. The performers are all versatile and delightful, and they have the ability to put you at ease and make you feel right at home. Fancy lights and sets will not be flying in, but hands will clap, notes will twang, fiddles will rip, and the thunder will roll.