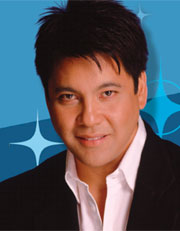 Note: Now playing in the Steve Wyrick Theatre in the Aladdin. Martin Nievera is playing inside the showroom at the Golden Nugget for an extended stay. There are no special effects, props, or flying contraptions...just his voice, and he is a man with an extraordinary voice. Nievera is a popular singer in the Philippines and Polynesia, and now he has returned to Vegas to delight the bigger and more diverse audiences of the city. Nievera had previously done an extended run at the Nugget, and now is back for more. The format of his show has changed a bit. He used to sing all of the songs that made him famous in the Philippines, but the focus has changed to singing a lot of the songs that has made Las Vegas famous. He still mixes in some of his standards, but this show is definitely geared to the American Vegas crowd. His voice is versatile and dynamic. He is upbeat and full of energy. He effortlessly changes styles and delightfully interprets some of today’s popular hits. It is easy to see why he gained his notoriety. He has a wonderful charm and charisma and easily establishes a great rapport with the audience. A nine-piece band and a backup singer back up the show, and even though this group has only been together for a short time, there never seemed to be a falter or missed cue. Nievera was very good at sharing his stage time as well. Each of the people in the band and the singer got to have a moment all of their own. They were moments to shine and showcase their individual talents. The showroom at the Golden Nugget seems to have been built for singers. It is an intimate room that reflects the sound well. Seating and sightlines are a bit awkward in certain areas of the room, but for the most part, it works. There are a few times in the evening that Nievera seems to chatter on a bit much, but fortunately, he gets back to singing. It is fun to watch him have fun on stage. This is the second time that Nievera has come to the Nugget stage, and I believe that he hopes that there will be a third, fourth, and finally permanent move. He aspires to the success of the other great singers that got their start right there on that stage. It seems that there could be a good chance that this sort of success could follow him as long as he continues to have fun and sing his heart out.