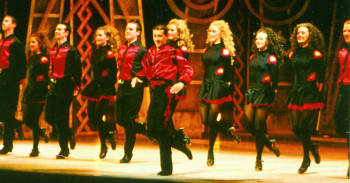 "Michael Flatley’s Lord of the Dance" is playing inside the theatre at the New York, New York Hotel and Casino. This production has just celebrated its fourth anniversary, and with it comes new costumes, new numbers, and a new energy brought forth by a talented cast of dancers, musicians, and performers. The story is based on old Irish folklore--a basic story of good vs. evil. The Dark Lord and his followers challenge the Good Lord (the Lord of the Dance) and his followers. Good triumphs over evil in the end; I came, I danced, I conquered; and it all ends happily--in a dance. It is unfortunate that these new additions and changes are coming so late in this productions run...the show is scheduled to close in late summer of 2002. The show is slated to be replaced by yet another Cirque du Soleil production. If these changes had come earlier, perhaps we wouldn’t be seeing this show leaving. However, there is also nothing wrong with wanting to end this successful run with a bang. If you like this type of Irish folk dancing, made famous by its predecessor, "Riverdance," then this is the time to see this show. There has been lots of criticism about the show--taped taps, music, the youth of the cast, repetitious, etc. The show has also fared poorly in it’s inevitable comparison to "Riverdance" (the show that brought Flatley his fame). I had also heard a lot of quips about Flatley himself--choosing not to dance and franchising the show out to others. With all of this in my mind as I entered the theatre, my expectations were not very high, and I was looking for these faults. These doubts and criticisms, however, faded very quickly. From the beginning of the show, these "youthful" performers entertained us just as well as any seasoned professionals. The music and the scenery painted beautiful pictures that intrigued and demanded attention. The inspiration and energy of this show swept me up. With all of these things going for it, I was able to sit back and see a wonderful show. The production is at it’s best when the entire company is out on stage dancing. We are thrilled and amazed at the coordination and unity of all of these performers. It is a style of dance that is both intriguing to watch and hear. If there were any supplemental taps-on-tape, it certainly wasn’t apparent. Each dancer seemed to be strong and capable and certainly a star in their own right. The larger production numbers are broken up by songs and musical numbers. The singer has a beautiful voice. She is very lyrical and seems to produce wonderfully pure tones. And while the songs are very pretty, they did not seem meaningful to the plot. I had a hard time understanding any of the words and so rather than advancing the story they were just pretty breaks in the dancing. The other dancing break came in the form of a pair of violinists. They were inspirational, exciting, and wonderful. I really wish that I could have heard more of them. Their dueling violins certainly seemed to reflect the duel that was going on in the dancing, but they seemed as if they could stand on their own as well. They generally played to taped supplemental music in which the violins were often lost. I wanted to listen to them. They were both wonderful players and performers, and a true delight to see. The weakest part of the production was the conflict between the Lord of the Dance and the Dark Lord. Neither the conflict nor the resolution were clearly defined or executed. The scene in which the two Lord’s and their followers face off with each other looked like a bad version of the rumble scene in "West Side Story." There was some pushing and shoving, but no clearly defined conflict. The final battle scene between the Lord of the Dance and the Dark Lord only seems to be resolved due to the intervention of the little Irish Imp, who comes in with a "you broke my penny whistle, and now you’re going to pay," attitude. The Dark Lord is vanquished, and so we can all celebrate--with a dance! The story may be a bit weak, and it does get a bit repetitious, but we go to see "The Lord of the Dance" for the dancing, and in this, we are not disappointed. The production is quickly coming to a close--so now is the time to see it.