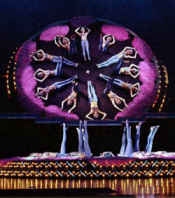 "Folies Bergere" is closing...after 49 years. It is very sad, and I don’t think that Las Vegas will be the same after it leaves. It is the longest running show in America, but on March 28, 2009; the run ends. I love "Folies Bergere." It is a show that I have seen a multitude of times, and I had to see it once more before it left. I never grew tired of it. I love the acts, the singing, the dancing, and of course, the showgirls. I have enjoyed seeing how it continued to grow and change over the years--the constant effort to keep it updated and fresh was always appreciated. "Folies Bergere" is the quintessential Las Vegas show...that last statement should be the sum total of my review. If someone were to think of a "Las Vegas show," "Folies Bergere" would embody it. "Folies" has everything that a Las Vegas show should have...singing, dancing, showgirls, comedy, spectacle, etc. It opened in December of 1959. It is a hallmark and cornerstone of entertainment in this town and as long as Las Vegas exists; there should have always been a "Folies Bergere." "Folies Bergere" is an extravaganza is packed with all that one would expect with a show of this style--beautiful showgirls, wonderful dancers, good singers, lavish and large sets and settings, and an abundance of both elegant and sexy costumes. This production can satisfy all of one's entertainment needs. The show supplies us with a wealth of talent. The audience is entertained by a variety of songs--upbeat and entertainment. The singers handle a wide range of styles as well. All of the songs are sung to taped music, however, and we certainly miss the dynamic that a live orchestra can bring to a show. The show plays at the Tiffany Theatre inside the Tropicana Hotel and Casino, and it has been successful for many reasons--some of which is its ability to change and the times, grow as a production, and never remain contented with the idea that everything is fine. There has been a continual process of evaluation and change that has kept this show fresh, contemporary, and a viable competitor amongst the other shows on the Strip. The real star of the show has always been the dancing and the showgirls. The dancing in the show is very strong. The dancers and the acrobats deliver very upbeat and energetic performances--with abilities that anyone can appreciate. One of the highlights of the production has to be the award winning "Can Can" number. The execution and energy of this number; with its array of movement from the dancers, and the flipping and turning from the acrobats; virtually stops the show. The adagio team, in the Folies, has always added class and depth to the production. The showgirls are absolutely gorgeous. They go from floating across the stage like a variety of gleaming Greek statues to jiggling and bouncing, in their near nakedness, across the stage with enough panache to enchant, entice and attract us. They are both sexy and classy. They are everything one expects of the classic Las Vegas showgirl. (The Wagnerian monolithic women section is a bit odd, but...okay.) "Folies Bergere" is a show that is worth seeing. Part of the staying power of this show has been its ability to update, change itself to keep things fresh. The first show of the evening is covered, so you can now bring the entire family to see this production. "Folies" does have something to entertain everyone, and it gives you exactly what you might expect from this type of production, and doesn't make any bones about the fact that this show is here to entertain. The show does its job and does it well. The show entertains us. This is an iconic show that will be a shame to lose. Hotel executives have not said what is going to replace the show yet, but they certainly have a tough act to follow. You need to see "Folies" before it leaves.